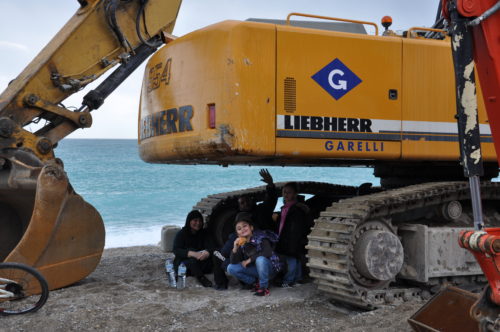 An improvised story for an unplanned shooting, and an unfinished movie.

During my stay in Nice, France, in March 2018, I decided to shoot an improvised short film with my photo camera. So I set out to find something that would draw my interest. Anything would be fine, as long as it’d involve my heart. Then I came across this family eating under a crane, to be protected from the rain. I asked them if we could design some story together, and they agreed. The little girl offered to be the hero of this improvised story. Unfortunately, mid-shooting (a shooting that lasted no more than 15 minutes!), the father came to me and asked me to erase a couple of shots of his daughter, deletion of which he supervised himself. Then he wouldn’t want the shooting to go ahead. “With all the things happening currently with images of kids !”, he said. “Of course, I understand, I have three kids myself!”, I told him.

Halas, my short would then end up being too short by a couple of shots.

Nevertheless, here is what’s left of it. Rather a mood/feel movie than a real movie. It’s as good as it gets, but it was fun to make! Like jumping back on a horse saddle after years of interruption.