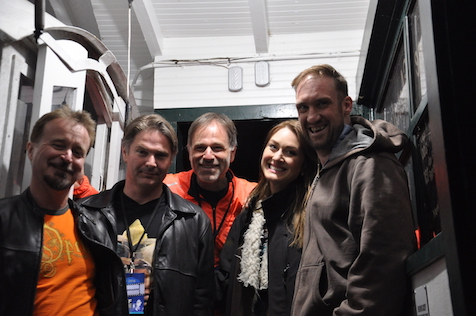 When I was invited to present my film, The Droid, in competition at the Julien Dubuque International Film Festival in Iowa, USA, I planned to shoot two short films over there. The first one I intended to make along an impressive railway bridge located at the convergence point of Illinois, Wisconsin and Iowa states. However, from the moment I saw the city extraordinary cable car, I knew I had to make a short around it somehow. By April 29, I had made two new friends, James Douglas and Jean-Paul Winslow, who’d play in the train short. They were OK for the cable short too, but we needed a girl. At first, I thought I’d never make it, till a beautiful access showed up at the festival. I went to her and less than a second, she and an actor friend of hers, Chad Allen, said “Let’s go do it! “. Half an hour later, we were shooting. I’ll never be grateful enough to the actors and all the people who followed me in this crazy endeavor: making an improvised short over 4 hours.

And we just did it!