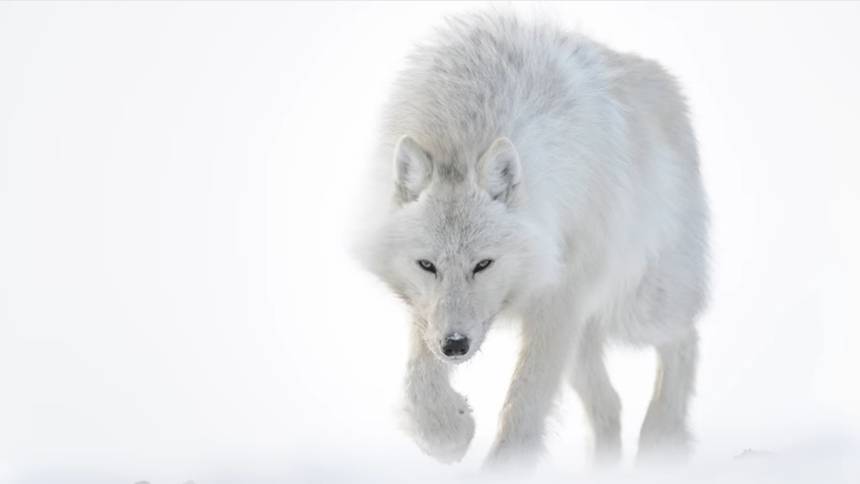 A couple of days ago, I was in Geneva for a self-development seminar. Together with my old father-like friend Eric Vuylsteke, whom I hadn’t seen for about a decade, we had planed to have a diner somewhere in the countryside. Eric and his wife Mireille had moved to Switzerland around 2009 and, after the meal, he offered to show me his home and its breathtaking view on the Leman lake. That’s also how I met his gorgeous dog Tessa.

When we moved back to the living room, I was suddenly caught by this huge photography of a white wolf (the exact picture featured in this post). Eric recalled that the photographer, Vincent Munier, whom I never had heard of hitherto, even came by his house to see how the image would fit into the space.

On this very evening, Eric also sent me a link to a movie where Munier would tell his extraordinary journey. The man would stand there, alone, in the white desert, for weeks, by minus 45°C, waiting for white wolves to show up. He would be desperate when, appearing at first like dots on the ice pack, a party of nine would approach from afar. Obviously, they were looking for some food…

While watching the documentary hereunder, I was particularly moved by Vincent’s whispers (especially as from minute 3.10) and by the tone of his voice. By the way he would beg for the wolves to appear, in order for his dreams to come true.

His vulnerability, his sense of genuineness, his pure honesty, his deep humanity, all talked straight to my heart and to my soul.

Was I to tell what I’d want to do next, and forever, I’d just say ” Through my craft, I want to share, to convey the exact same feeling of profound humanity “.