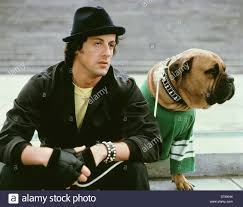 The story of the birth of the famous movie Rocky can’t be told separately from that of actor Sylvester Stallone himself.

The man going by the nickname of Sly moved from New-York to California in the mid 1970s. He was married and wanted to become an actor, but times were so though for them financially that his wife got tired of the situation and left him. Unfortunately for Sylvester, things worsened so much that he ended up being forced to sell his dog, Butkus, his best and only companion, in order to help make ends meet since he was literally starving.

He picked a liquor store and waited by the entrance, asking everyone whether they’d buy the dog. Eventually a man came by and agreed to take the mastiff but not for the $US 100 initially expected. Barely a quarter of that amount changed hands that day for Sly’s dear companion.

The most miserable day of my life, Stallone recalled.

The story has it that, meanwhile, after watching a boxing match on TV, Muhammad Ali vs Chuck Wepner, Sly got an idea and locked himself for 20 hours in a row, during which he wrote the whole screenplay of Rocky.

Then begun his journey to finding a producer to make the movie. After a while Sylvester bumped into one who would be willing to offer him $US 100.000 for the script. But Sly wanted to star in the movie. They refused as he was nobody and certainly not a bankable actor. So Sly left. A little after, the same producers called him back and offered him twice that amount, but still no starring for Stallone, so he turned down the offer again. However Sly was definitely starving, but he had such a faith in his story that he remained impervious.

Ultimately, the producers came back to him. This last time, they were ready to pay him about $US 300.000. But once again Sly would refuse for the same reason. Tired, the producers finally agreed to meet his starring term, however he’d have to bear the risk with them. So, instead of selling his script for several hundred of thousands of dollars, Stallone ended up with $US 35.000 plus some points of the movie revenues… and he’d be the star. Sylvester Stallone was so convinced that no-one else but him could be Rocky that he scored.

Having said that, the most marvelous part of the story is still to come. Six months later, when he got the script money, the first thing Sly did would be to go back to the liquor store. There, he’d wait for three consecutive days until, by chance, the man who had bought his dog would come by. Sly offered him to repurchase the dog, for $US 100, but the man would refuse, arguing that he loved his new companion. After an unbelievable round of negotiations, the man agreed to sell back the bullmastiff, Butkus,… for $US 15.000 plus points in the movie.

The man got his name in the credit roll of Rocky, while the dog that Stallone receives from Adrian and which he hugs at the end of the movie was none other than his.