I was always so amazed by the simplicity of some special effects.

Did you know that Indiana was the name of George Lucas’s dog?

And that it was Tom Selleck (alias Magnum) who was first chosen as Indiana Jones, until it turned impossible for him to break his contract for the Magnum series.

It all started when Spielberg told Lucas, while on holiday in Hawaii, that he dreamed of shooting a James Bond movie. Lucas answered him that he had something much better for him. The film would be entitled The Adventures of Indiana Smith. However, after day one of shooting, Spielberg changed the name as he found it too close to Nevada Smith, a movie starring Steve MacQueen which was released in 1966.  Indiana Jones was born.

Among the most famous scenes, there’s this one where Indiana jumped into a pit filled with snakes. Spielberg wanted to awaken our deepest fears during this quite convincing sequence. Initially, there were 2.000 snakes, but the director wanted more. So the crew would search the whole region for days, until they could gather 7.000 more. Bottom line, when Jones touched down, he unexpectedly faced a cobra with its cap deployed, which in that time was a really breathtaking moment. People wondered how the actor managed to keep so cool and natural.

Well, Harrison Ford wouldn’t be happier than you and me when confronted from so close with lethal reptiles. Consequently, the practical effects crew came up with the simplest idea in the world, the one that would save the scene at virtually no effects cost. They installed a piece of glass between the mark where Ford would land and the snake. All that would be needed next would be to find the right camera angle that would maximize image quality and minimize all possible reflexion. Of course nowadays, everything would be shot against a green key (a green background) and the cobra would be computer generated.

In the end of the day, who cares! Only matters to keep what the film makers call “suspension of disbelief” (ensuring the viewers keep believing the story).

Later Lucas, producer Indiana Jones, sold it to the Fox Studios at very good financial conditions. Too good apparently according to the opinion of one of the studio executives, who told his boss “We’ve been shafted!”.

And the boss to reply “With such people, I’m willing to be shafted like this three times a year!”. 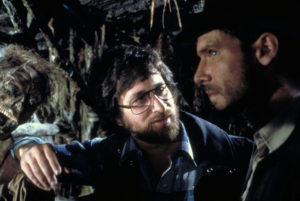 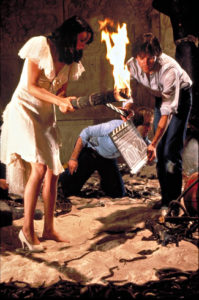 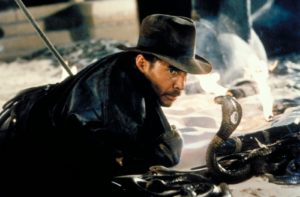