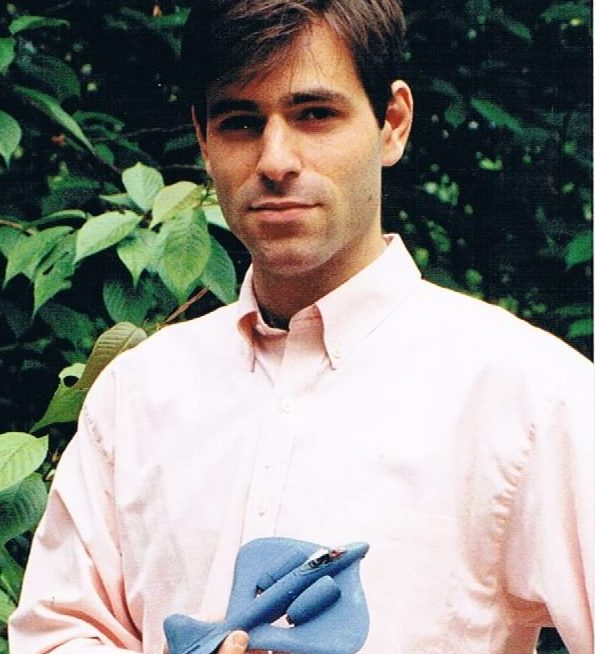 When I re-discovered this picture of me, taken when I was 25 years old, I was stunned.

Can you imagine, this!

I was there, at my parent’s house. Holding one of the first models I created for a universe I didn’t know anything about yet. I wouldn’t have a proper name even for that story. I only could see were images, glimpses of scenes, but the whole picture never occurred to me. It was kind of a Frankenstein, where a body is created without a soul.

I did well write some stuff, some screenplay (awful I must admit) entitled “Ice”, which of course nobody would be interested in producing. On top of that, this took place about four years before I even produced and directed my first short film, The Half-Open Door. Which meant I wasn’t ready at all or even remotely able technically to direct it. Not to mention emotionally!

Still, a quarter of a century later, I have the full story. A trilogy.

At last, thus, I’m in the process of conceiving and designing the cover of the first volume of my trilogy novel The Mecha-Soul / L’Âme Mécanique, and I’m holding those very same early models in my hands so as to decide what should be featured. If many of those flying ships I did build when I was a young adult, who can tell how long they had already been in my mind before! I’d say at least seventeen years. I probably was seven or eight when the first images came. At the time, I didn’t had a clue at all what to do with them.

It’s been a bit like a reversed puzzle. At first, you get some visual pictures, and then, bit by bit, you slowly figure out how the story unfolds and what kind of universe you’re creating.

More to come about the birth of The Mecha-Soul. It’s a trilogy novel, but it reads and feels like a movie, as confirmed many early readers. And to me, they’re inevitably linked.

Now, for the pleasure of discovery, enjoy a bit about the origin of the Fantasy genre in the movie universe (narrated in French, I’m afraid!).