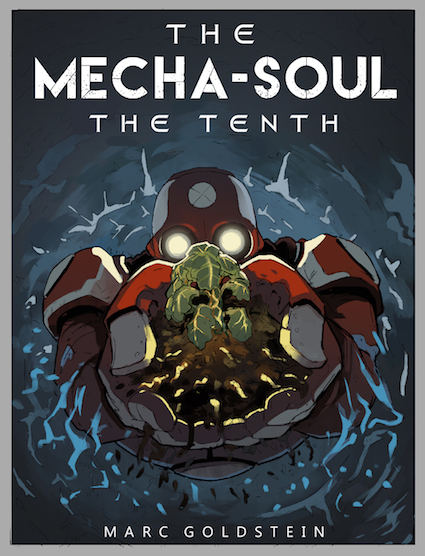 Before starting to design the cover of volume 1 of The Mecha-Soul/L’Âme Mécanique, I didn’t expect that it would mean turning upside-down all I ever knew about my world.

Over the years, I’ve created lost of covers, but never was I so deeply involved in the meaning of everything I’d put on it. Eventually, there’s my robot, Hal, narrator of the trilogy, together with a tiny tree which would symbolize the nature that it’s attempting to save. And the ocean, where everything began.

Then I had to make sure it’d convey the right message. What message would that be, by the way? Each step of the way I’d show the sketches to various people who wouldn’t know what we were talking about, asking the questions “What do you see there? What is it about according to you?”.

As far as this version is concerned, which I labeled 2 (actually it’s number 5), I got very interesting comments: everybody sees a robot jumping out of the water. The word that represents the best the image according to one of the test audience would be “hope”. Hope is exactly what I was looking for. Also I got “Interesting, intriguing, you want to know more!”. It’s the first time ever I’ve gotten so far in making sure a cover would draw such an interest.

But then the down side of the survey would be that it looks as if the thing that holds the plant wouldn’t be the robot hands, but some mandibles that would come out of his mouth. Of course it’s an exaggeration, but it means that there’s still something unclear about the color and the light around the hands. The message must be perfectly clear as people have microseconds to get attracted or not.

So there’ll be at least one more elaborated sketch… before reaching the photo realistic stage.

Feel free to watch some drawing stages in the video hereunder.