When I look back at the invitation I got from the Diamond High Council/Hoge Raad voor Diamant (HRD), which dates back to 2003, I still doubt it really happened. It was still the glorious years of the Antwerp industry, when Peter Meeus and his crew were implementing his strategic plan designed to put Antwerp on the map for good.

I had been working for the Rapaport Diamond Report magazine for five years already and I was blessed to be invited at this memorable dinner where William Clinton would be the first guest of honor invited for the second Antwerp Diamond Conference.

Together with the 1,300 guests, I would enjoy a presidential speech from the former US President, while sitting barely fifteen meters away from him.

The move initiated by Peter Meeus was definitely a stroke of genius. There would be about six memorable editions of the Antwerp Diamond Conference, with eminent guests of honor, all of which I had the pleasure of attending:

2007: Ellen Johnson-Sirleaf, president of Liberia who was elected in 2005 and was Africa’s first elected female head of state.  Bob Geldof was also a guest speaker and I was particularly impressed by his genuine humanity. He wouldn’t really care about pleasing the industry leaders gathered in the audience, but rather present the blunt truth. 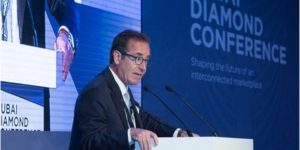