A couple of hours before assembling the first test copies of volume 1 of The Mecha-Soul/L’Âme Mécanique, I received a new cover sketch, which is pictured below this post.

The plant was now covering the largest part of the mouth and nose,  but still not enough for me, not enough to maintain the mystery.

Also, as I required, the fingers under the plant and earth had been moved more forward.

So, globally, the whole picture was definitely better understandable. Again, I submitted the image to and uninformed audience, and, even though there were serious improvements, there would still be something wrong, something unclear.

I figured out that that something would have to do with the thumbs seeming to be originating from a place way too close to the robot mouth. This feature was confusing and leading some people to the impression they were forming kind of a claw attached to the mouth.

Eventually, we ended up with the version featured in this post, where the tree covers more of the face, maintaining the mystery, where the hands are clearly visible under the earth, and where the thumbs have been redesigned and reoriented in a more realistic way.

This is a much more balanced version, which has been confirmed by the audience: there’s no more doubt for any of them as to what it is!

In case you wish to see more of the drawing phase of this cover, please click on the following link. 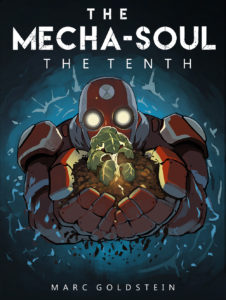